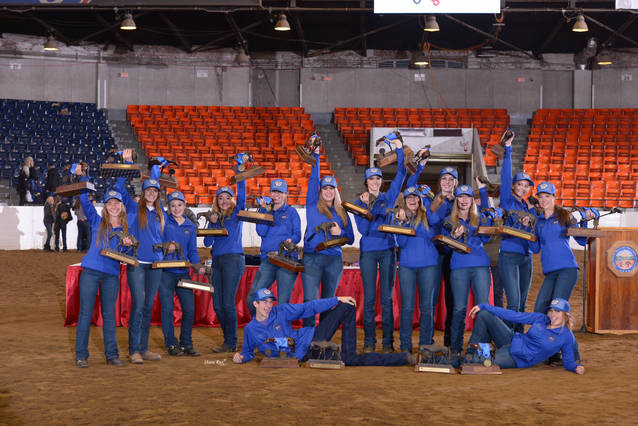 Youth from state and regional Quarter Horse associations across the U.S. and Canada gathered for the largest National Youth Team Tournament in the world at the All American Quarter Horse Congress Sunday, October 21.

This year’s National Youth Activity Team Tournament (NYATT) hosted more than 60 teams and offered a new division of competition. Division I is a team entered in eight to fourteen NYATT classes while Division II teams are entered in one to seven NYATT classes. This split is only for the awards ceremony so that each division competes for separate top ten division awards.

Each team may consist of four to fourteen riders, with no more than two members competing in each of the seven NYATT classes: Barrel Racing, Horsemanship, Hunt Seat Equitation, Hunter Under Saddle, Reining, Showmanship and Western Pleasure. To determine overall team standings, points are awarded for each individual’s efforts in every class, with first place receiving 10 points, second place nine points, and so on.

In the first year of Division II, the Oklahoma QHA team earned first place honors with 49 points, including a third place by Brody Galyean in Western Pleasure, while Illinois QHA took second with 43 points and Rocky Mountain QHA and North Carolina QHA tied with 21 points for third.