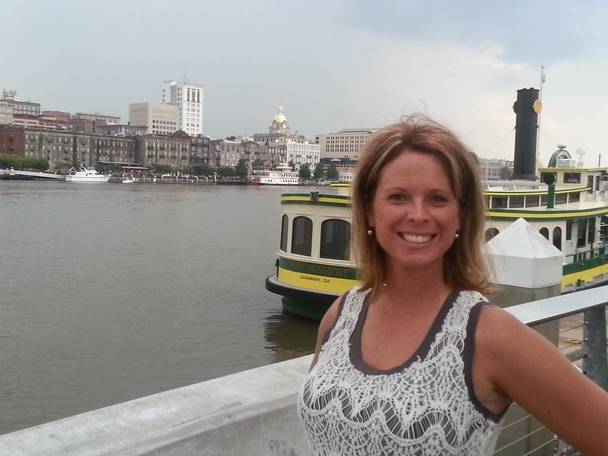 Where were you born and raised:

I was born and raised in Allegany, New York, a small town south-east of Buffalo, New York.

Where do you live now and with who:

I live in Hamilton, Ohio on a 40 acre farm with my husband Marc, dog Zoey, cats Dottie and Darla and four horses Stormie, Shady, Kit and Pete.  Marc and I are “weekend” farmers in that we both have full-time careers.  Somehow, we manage to harvest the majority of our acreage as alfalfa hay.

I graduated from Saint Bonaventure University with a Bachelor of Science in Accounting.  While attending college I worked full-time as a waitress and during the summer months added on a second job just so I could pay for my education.  During my freshman year I was a walk-on for the women’s basketball team.  Unfortunately, my days as a Division 1 basketball player were cut short due to a career ending injury.

Please describe what you do for a living:

I work in Florence, KY as a financial executive for a manufacturing facility of a global beauty care company based in Paris, France.  I am a Certified Public Accountant.

Please state your involvement in any extracurricular activities and any charities or community service:

During my career, I have had the privilege of working at large corporations that fully support charitable activities.  With that said, I have participated in many golf outings and volunteer activities.  Some of the most recent are a family that we adopted at Christmas time and provided gifts for the entire family, Polar Plunge for Special Olympics (although I didn’t get to jump because the event was on the same day as the banquet and I honored my commitment to AQHYA) and donations to the Food Pantry/Homeless Shelter.

Please discuss your current and past horses along with show highlights:

I purchased my first Quarter Horse in 1999, Famous Shady Lady, as a 2 year old and pretty much did all the “training” myself.  We weren’t that accomplished but at least I was showing AQHA!  She suffered a career ending injury, but enjoys life on our 40 acres.

Don’t Pass Me Off was next. She was very accomplished, a steady eddy and taught me a ton.  I mostly kept her at home and, at the larger shows, I received coaching from Dan and Darlene Trein.  In 2003, I was top ten at Congress in equitation with her. I sold Oakley with the understanding that she would come back to me or her original owner/breeder to teach the next generation of riders.  Oakley has gone full circle, back with her original owner, and giving a four-year old girl the confidence to ride.

After receiving a well-known breeder’s list of horses for sale from a friend and after doing a little homework, I found my next partner.  Itsamazing had been prepared for the first Reichert’s $100,000 Pleasure Class as a two year old, although he traveled to the show, he never made it into the pen. Kenny and Ashley Lakins assured me that he would make an all-arounder.  So I bought him, sight unseen and never riding him.  When I went to pick Yogi up all I knew was that he was bay and a stud.  Thankfully, his Reichert ad hung on the wall assuring me that I had the right horse. Yogi was top five junior horse in the nation in his five year old year under the guidance of Bruce Vickery.  As a team, Yogi and I won numerous all-around awards, qualified for the World Show, and placed in the top five at Congress in trail and performance halter under the guidance of Brent Tincher.  Yogi is also an AQHA Champion.

I am currently horse shopping for the right partner after a three-year hiatus from horse showing.  I show in the western all-around events and my favorite classes are showmanship and trail.

Do you have a hobby other than horses?

In my spare time, I enjoy traveling, gardening, swimming and spending time with family.

What is something you have done that no one would guess you’ve done:

I am adventurous…I have zip lined the Vegas strip!